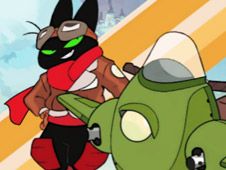 What is Aces of Pure Heart?

Aces of Pure Heart is one of the latest Mao Mao Games online that our team is delighted to share with you all here for free, as we are probably the first ones showcasing the game to the many fans of this Cartoon Network Games category, who are about to have a really good day and time with their favorite characters!

Become Aces of Pure Heart with Mao Mao and the gang!

In this new cyberpunk-like game Mao Mao will be driving a flying motorbike that you control using the arrow keys, and when you've got the energy bar full, you can activate a nitro boost that will give you a ton of speed to use.

Alien monsters and creatures will swarm you and move in various paths and at different speeds, and you must avoid bumping into them directly because if they deplete your health bar, you lose.

Instead, point your bike towards them so that the blasters shoot at them automatically, and gain a big score in return for defeating them all.

The more points, the better, and when you defeat enemies and power-ups drop, fly into them to grab them and use them to your advantage against your enemies.

It's that simple and fun, surely an experience unlike you've had in this category before, so we highly recommend you give it a chance right now, you won't regret it!

Use the arrows and spacebar.