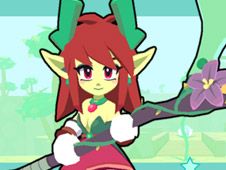 What is The Orchid’s Edge?

The Orchid’s Edge is a fantasy action game in 3D with fighting, monsters, robots, and much more, resulting in one of the best new RPG Games online that you can now try on our website, and since it also has anime features and designs, we're sure you will want to try it out even more so!

Get ready for action with The Orchid’s Edge online!

Willow is the name of the girl with red hair whose role you play in this game, whose role is that of a Dryad spirit Reaper. The forest and its peaceful souls are under invasion by mechanical beings known as Clunkers, so you need to help her use the weapon at her disposal, called The Wild Orchid, to keep the natural order and cycle of life going.

The game is an action platformer with a vast world that you see in the third person, where you have to defeat the enemies you encounter and save the good souls in need of that.

Defeat enemies and collect the gems they leave behind, and in case you need some more health, cut down the weeds with hearts on them to replenish them.

It's quite straightforward and lots of fun, so start this game right now, as you won't get it anywhere else any time soon, and don't hesitate to support the original developers!