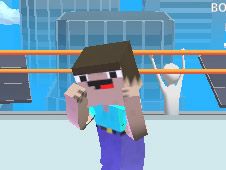 What is Noob: Brawl Frenzy?

Noob: Brawl Frenzy is one of the first-ever Minecraft wrestling games 3D on our website, precisely why we would not have missed this opportunity of sharing it with everyone right now for anything in the world, as once more we prove to you why here you are able to find and play the best new games of the internet, daily!

To control the Noob's movements in the boxing ring, use the mouse to drag him toward the enemy and attack, you can also get into the ropes and then drag and release to make a special move, and the second special move is climbing on the corners and then stomping the enemies.

Win one match after another and then defeat the bosses when you come to their fights, and don't hesitate to use the coins you earn to upgrade the three main stats of your fighter:

You can also buy new skins and new arenas in which to fight. Those are the basics to this game, so now that you know them, you should be prepared to give your best at it right now, and we hope you also share it with as many of your friends as well!