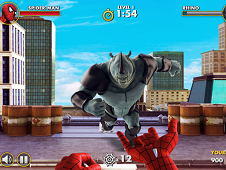 What is Spiderman Web Shooter?

The new Spiderman game will put the fait accompli namely will have to fight with all sorts of monsters from Dr. Octopus, Rhino, Green Goblin and many other opponents who have in the city that is supposed to guard day by day. For this you will need to band throwing skills and perfecting fighters is just practicing. Go up the block where you live and there you will meet all kinds rhino throwing cans of garbage on you and your friends. You will have to act your super hero powers as any spider man there, and Spiderman costume will have to throw the spider to all adversaries and who you're trying to remove as soon passing through all the missions play in record time.

the mouse will have to throw opponents cobweb in which annoys you and will destroy you.