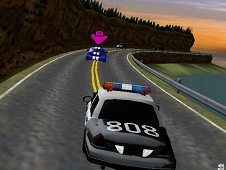 What is Redline Rumble 3?

Redline Rumble 3 is one of the nicest and newest games with cops is this where you have to dress clothes, a police uniform you will need to represent with pride and courage in a mad race after race and thieves, criminals, terrorists and inmates who escaped from jail. Try to handle as well in the new position that you have, earning increasingly more actions the police station controlled by your police chief and thus giving them grow in ranks to succeed to have a greater police equipment with which to catch people who do not obey the law. When you start a police car chase will have put your seat belt, you start to lights and siren to give way and the car rotating beacons will help you catch people who do not obey the laws of Romania . Great care to the track that police cars have to go through it because it most often is a cumbersome route, a path will be difficult and try to dodge all the obstacles in front of you, because through these schemes will managed to get, to catch him, to capture the thief who ran the police car, then you have to follow the procedures so that we manage to immobilize the thief. After you manage to catch the thief fleeing the police car by car, you will have to put in it, to pop out and you put them in the hands tiers; after it is immobilized will need to go to the police station, then depending on the record and it prepares them a criminal and put him in court and with masked gendarmes to guard it until you get in jail, in a maximum security jail. Watch the super Mare Romanian police cars 3D game because when put into other cars, car or hurt yourself on fire and they will collapse, you can barely take your mission to finish. After completing the new game, we invite you leave us a comment and tell us how you found it, then give us a vote or even a LIKE on Facebook where this game is to your liking.

the arrows will have to drive special police car and try to win all misiuniel that cop who will lead these police cars have.