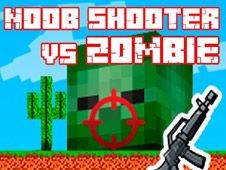 What is Noob Shooter Vs Zombie?

Whenever new shooting games get added over to our category of Minecraft Games online, you can know for sure that they are very well received by our visitors, which is going to be the case right now and here as well, as we invite you to check out the game called Noob Shooter Vs Zombie, a puzzle shooting game with Minecraft zombies!

Shoot the Minecraft Zombies to save the world!

As we said, the game has a puzzle element to it, meaning that you have to shoot not just straight at the targets, since they are too many of them, but instead aim towards wrecking balls, bombs, heavy stuff, or other things that can be dropped against the head of creepers, so that you defeat multiple of them in one go.

You should do that because for each level of the game you have a limited number of bullets, and if you don't eliminate all your targets in that given number, you lose and have to start again, something we don't wish for any of our players. You get stars at the end of each level, so try hard to get three out of three for each one.

Good luck to you all, and if you are up for it, check out all the other cool new games of the day added here, and keep the fun going!