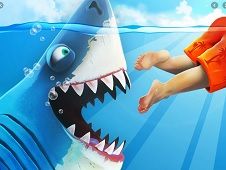 What is Miami Shark?

As the a little bit earlier, on our fantastic and awesome gaming web-site, we bring you only the highest quality games to play for you and your friends. This fantastic game, is another part from another game posted a little bit earlier, called New York Shark. Alright, this time we are talking about the same shark, but not it has just arrived to another big city from the West Coast of the North America, a little bit more in the South part than New York, the city Miami. This hungry shark seems to be unsatisfied with the blood and human flash eaten in New York and it seems to wanna more and more so he decided to came right here, in Miami, hoping that he's gonna get a real delicious and consistent meal. Control it and lead it to ending of this hunger that it feels and eat a lot of people, boats, divers and all kind of humans that are unlucky enough to appear in his face while he's hungry. Remember that if you can catch an helicopter, by jumping from the deepness of the ocean to the skies, you get more bonus points, and its are so important for your final score! Good luck and have a lot of fun while you are playing!

Use the arrows, A, Ctrl