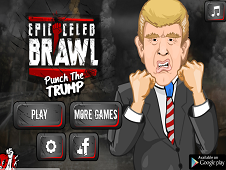 What is Punch the Trump?

Donald Trump is a politician who is really interested in becoming a good and respected president for the United States of America. First of all, you have to know and to understand that this awesome and incredible punching game is a parody, who brings you the unique occasion to fight and to punch the politian Donald Trump, who is really to become the USA president if somebody doesn't stop him in time! He has collected a lot of haters during the time because of his wrong behavior so right now, it is the revenge time for all the people around the world, especially from the USA! Right now, you have the unique occasion to use the keys M and Z for some ordinary punches and the keys X and N for some really really hard and tough fists into Donald Trump's face because he is going to be the punching bag for you. Beat him until he is no longer able to stay on his own feeth and have a lot of fun while you are doing this. Do not let him touch you by using the SPACE key, which is going to help your to block his punches. Good luck and make him look so damaged after this fight!