Fairy Tail Vs One Piece 1.0 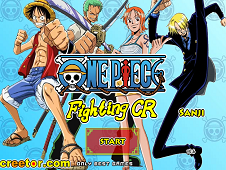 What is One Piece Fighting CR: Sanji?

One Piece Fighting CR: Sanji is another awesome fighting game, where you have the opportunity to express your fury and anger if you feel it, by fighting another opponents, at least as skilled as you are. In the following mission, you have to use the A, S, D, W keys or the arrow keys in order to move and the U, I, J, K keys in order to attack or get in the defensive position and do not stop until you get your enemies down as soon as it is possible. Make sure that you will have no problems and do more damages than you will get in this fighting adventure and select your opponent at the beginning of the game, where you will select your character too. You have the option to play in two players so you can ask a friend to play this game alongside you so fight against each other and establish who is the best. Good luck for the last time and do not forget that the most important thing, which you must know is that you have to get from opponent to opponent until you will successfully kill them all. Do not stop until you are done so make sure that you will be alright!