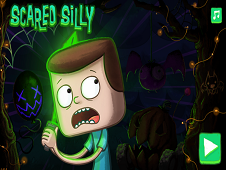 What is Clarence Scared Silly ?

Clarence is such a bad boy and his best friend Jeff, just can't get anymore from him, because his jokes are already too much for Jeff but this one is probably going to destroy their friendship once and for all! The Hallowen might be gone, but its spree is still here so you have to do anything in order to try to make a fool out of Jeff, by scarying him to death. Clarence has prepared so many really dangerous traps and scary barriers for Jeff so go out in the backyard and get through them successfully by locking them. There will be some paths for you, which you must follow successfully and each side of path and each task will bring you another piece of the great map you have to put head to head in order to get it whole. But also watch out, because there will be some dangerous spots, right on the floor and if you touch one of them, you will lose the game, getting too afraid and making Clarance so satisfied and Jeff almost dead. Spooky balloons will be appear out of the blue, unexpected so you have to kill them with your sword, using the arrows to get closer to them but don't step on the dangerous areas too!