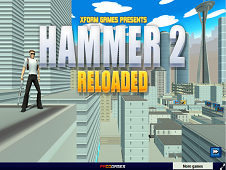 What is Hammer 2 Reloaded ?

Hammer 2 Reloaded is probably one of the most incredible adventure and shooting game. This game and GTA are alike, almost, because you have only to kill in this game, as many thugs and terrorists as it is possible or as many as the mission and task from this game required from you in different moments of the playing. For example, for the instance you have to shoot 100 thugs and bad buys, which will be armed and so dangerous too and they are spread all over the city so you have a little work to do, wandering there with no issues or another obstacles, but still with your sight in all parts because you have to pay attention in order to do not get hit by another thug from behind or in your head. Chase them and kill them but watch out because they are so many at the same time so you can't reach only one of them, but more so you have to defence at the same time. They won't be dressed up in large and wide clothes with the typical thug style, but in suits and tie so watch out, because they are dangerous. Use the arrow keys or W, S, D, A keys in order to move and wander all around the citiy and mouse for shooting and aiming the opponents! With the SPACE Bar you will be able to jump over obstacles!