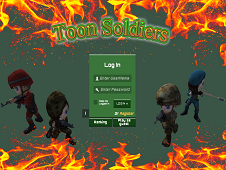 What is Toon Soldiers ?

Toon Soldiers is such a great Counter Strike adventure game, where you have the occasion to use the mouse in order to prove that you are the greatest shooter from all times, making your all opponents bite the dust so prove that you are the greatest and you can easily destroy your opponents with not such a big effort. You need to join a server from the window full of servers in the middle of the game screen and from there, you need to pick up the right server you want to join. Join it successfully and watch the rest of the game as a spectator until you are able to pick up a team, red or blue! Do not hesitate to start shooting all your opponents in the shortest time possible and upgrade your weapons and guns, with the money earned in the previous rounds! Do not forget that it is so important for you to not get killed so gather up more kills than deaths and you are on the right way! Also, you can switch the server picking up a different map if you want so let's go for it right now, shooting them all with your toon soldier and build up the most powerful team!

Use the arrow keys, mouse