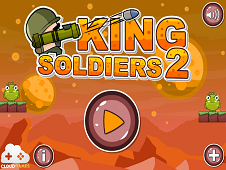 What is King Soldiers 2?

King Soldiers 2 is the second version of the King Soldiers game, maybe the greatest shooting, logical thinking, and accuracy game, all in one! The mission which you had in the first version of this special game, was apparently simple because you only had to shoot some monsters and aliens, so ugly and green. This will be your mission too in this game, but not that simple, because you have to shoot the same monsters and aliens, but they will be stronger than in the last series and the missions will be harder and harder.

There will be 21 full of adventure missions for you so you have to handle all of them successfully, killing the right monsters, from the necessary amount of missiles which you have available. Your logical thinking is going to be used in the moments when you have to kill the monsters using some ricochets, being the only way to kill them at the moment.

This is not going to be easy and the monsters will have more lives than one, so it will be not enough anymore if you shoot them only once. Good luck and prove that you really deserve the title of the King Soldier!