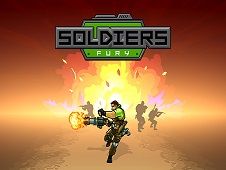 What is Soldiers Fury?

Soldiers Fury is an interesting shoot 'em up game where you need to shoot the bad guys as a lone soldier running on the road for as long as you can. You must use your hun to shoot down the enemies and get past them.

There are many obstacles you will encounter on the level such as the enemies that shoot at you and you must avoid their shots, the bushes, trees, and other barricades you have to avoid to continue going forward. On the level, you will also find explosive barrels that will kill all enemies near them if you shoot them for them to explode. You will also find crates that you can shoot open, the crates usually contain other guns but they can also contain shields and medkits.

There are many guns in the game: