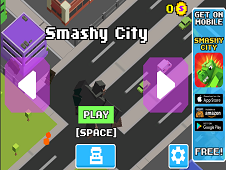 What is Smashy City ?

Smashing City is definitely one of the most incredible, cool and so awesome smashing game, where you have to destroy absolutely everything next to you, in order to prove that you are the best smasher in the city. This isn't going to be actually easy, so prove that you are a real master in this fantastic city smashing and destroying task and make sure that, using the left and right arrow keys, you will successfully turn around and wander there, among the city, with no problems, smashing everything. Destroy buildings, blast up cars and simply produce a disaster for this city, whose people and police especially must stop you. Watch out, because each hit from behind hurts so avoid getting hit from there, smashing the opponents in your back. At some point, the Police, army, tanks, helicopters will shoot you with so many guns but the goal is to destroy those ones from behind, because they really hurt you. Complete the rampage meter in the right side of the game screen and become the greatest killing machine and destroyer in this incredible city!