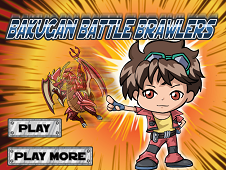 What is Bakugan Battle Brawlers ?

Bakugan Battle Brawlers is the team made of Dan Kuso and his friends alongside their bakugans, trying to fight of the fate of Vestroia dimension, which has just lost its natural balance and right now, someone, who are Bakugan Battle Brawlers, must fight for its peace, avoiding the opponents attacks of evil bakugans, who wanna put their hands on the cores and get the reigning over the dimension Vestroia. In this special game, you have the occasion to play with the leader of Bakugan Battle Brawlers, Dan Kuso and with its bakugan, flying over the forest and fight the evil bakugans by shooting them. The controls are simple, so use the Z key in order to launch different magical projectiles to the evil bakugans, your opponents and also use the arrow keys for going in different sides of the game screen, during your flight. When the load of power is sucessfully accomplished, use the X key for the extra ray shooting. Good luck for the last time and prove that you are the greatest Bakugan master alongside Dan Kuso and kill the opponents, who firstly will toss stones to you and then another projectiles too!