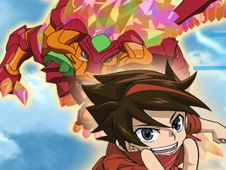 It really has been a while since we brought over for you all some brand new Bakugan Games online, so it is with great delight that we are doing it right now and here, when our team invites you all to try out an arena fighting game with Bakugans unlike you saw here before, so giving it a chance is something we hope you do right away!

Can you win the battles of Geogans?

Two Bakugans will fight one another in the arena, and the one on the left you control, and you go up against the one on the right, which is controlled by the computer.

To gather energy to attack your opponent you will have to do various mouse activities and moves, such as clicking on tiles to eliminate them, sliding things in a line, or spinning a ball until it disappears.

With enough energy, you attack the Bakugan, and if you completely eliminate their health bar, you don't win instantly, because a Geogan will appear, a new kind of creature, and you will have to gain even more power to defeat it as well.

Enter the name you want to be known as, win as many battles as possible, and try climbing in the worldwide rankings of all the other Bakugan Battlers out there. Have fun, and all the best we wish for you!