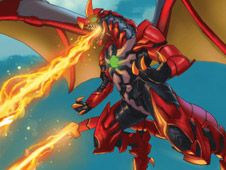 What is Bakugan Bullet Hell?

On our website, you will now be able to find and play some of the coolest new Bakugan Armored Alliance Games online, something we are very excited about, and we hope you will be too since we know that Bakugan has been a worldwide phenomenon for years now, so having games in it such as Bakugan Bullet Hell is only going to make its fans even happier than before!

Become a Bakugan monster and rain bullets on your enemies!

Instead of fighting using the Bakugan balls, as usual, you will actually become a red Bakugan dragon, and you will fly into the skies, where you have to defeat all of the enemies that you encounter. Take down all the robots and other Bakugan in the air, making sure that the rockets fly towards you or their attacks don't reach you instead, so you don't get brought down.

To take aim at your enemies, use the W, A, S, D keys to fly around in the direction you want, and the shots are going to be made automatically, so point towards the enemies and then fire away! If you can fuse with another Bakugan from the course, you can activate a special attack with the spacebar, and take out multiple foes in one go.

Be on the lookout for power-ups as well, such as the shields that give you extra protection, or the ones that help you attack, and try to survive for a big distance, and get lots of points by defeating lots of enemies.

Good luck, have fun, and don't stop here, since it would be a shame not to try out more of our games!

Use the W, A, S, D keys to move, spacebar for a special attack.