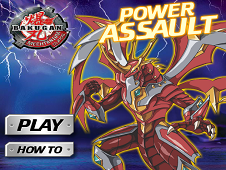 What is Bakugan Mechtanium Surge?

Bakugans are in a endlessly fight since they've escaped from their dimension, Vestroia and right now, they wanna share some fights with you so get along with one of them and fight so many other bakugans, trying to destroy them and send their scratches back to their dimension, because they are too weak for this battle. Always by yourself, you have to deal alone with the army of opponents, which is getting bigger and bigger with each level. There will be two kind of squares, separated by a blank empty space. The squares are actually the fields where the bakugans stay and attack each other. Keep the mouse pressed in order to adjust the intensity of the shot that is just going to be launched and move the mouse all around the square in order to establish the zone from where you want to shoot from and let's go! Release the fire ball and kill as many bakugans as it is required from you in each level and this way you may accomplish all the levels from this game successfully. Good luck and have so much fun in this cool, incredible and so fantastic fighting battle game and try to waste not too much time. In the top side you can see the life left for you or your opponents so hit them so powerful!