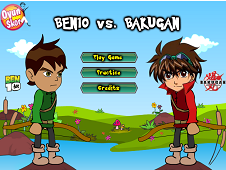 A master when it comes to archery must definitely be calm, focused and of curse, all the time with a single think in his mind, making the opponent regret that he was challenged. This special and so fantastic game, presents to you the awesome adventure between Ben 10, the master of Aliens from different galaxies using his Omnitrix watch to transform in all of them and Dan Kuso, a Japanese kid, a master of bakugans, the creatures from the other dimnesion, named Vastroia, dimension already rescued by his force in a great team with the bakugans. Let's get to the work right now, before there will be too late and take the control over anything, making sure that you will shoot the other player right in the head with your arrow. Pick your bow and your player, selecting from Dan and Ben and then start the shooting arrows mission, placing them in the bow and aiming. Drag the mouse in the oppsite plae you wanna shoot and this way you will aim and release it in order to launch the arrow to the selected direction. Good luck and have so much fun in this special, cool and so incredible shooting arrows game and prove that you can successfully deal with this situation. There are the most sensitive spots on the human body so you have to shoot your opponent there soon!