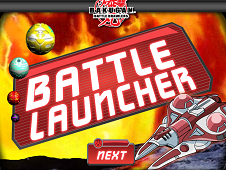 What is Bakugan Battle Launcher ?

Bakugan Battle Launcher is definitely the greatest bakugan and shooting accuracy game, you should definitely try in this awesome and so cool moment! Start with reading a couple of instructions given to you by the leader of the Bakugan Brawlers so let's get to the work and start shooting. As you know, from a different dimension than ours, there are coming so many bakugans evil or not. The ones in this game are evil, all of them and they are designed as some balls so you have to destroy them before getting away through the portal at the end of each level and don't let them go there and destroy our world, because this is their plan! In the middle of the rolling paths, there will be a bakugan balls launcher controlled by you. Use the mouse in order to aim in the right direction and shoot where there are two or more of the same type balls, in order to make them vanish this way and some points will get in your account immediately! Try to focus on gathering up as many points as it is possible and this is actually a zooma adventure, but with bakugan balls replacing the zooma balls. If a single bakugan ball reaches the portal in the end of the game map and escapes, you've lost!