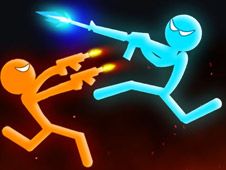 What is Stick Duel: Revenge?

Is the loser of the previous Stick Duel ready to take his or her revenge? That is what we invite you to do right now with one yet another amazing 2 player game with shooting, fighting, and action, all done with stickmen since the previous games in the series had been received extraordinarily well, so there's no doubt in our minds that the same will be true for this one too!

Let's win the Stick Duel and get our revenge!

Two stickmen, one red, one blue, enter into an arena where they are given various weapons at their disposal, and they have to use them to shoot, attack and hit one another so that you deplete the other one's life first, winning more matches than the second player to establish your supremacy! The first player who loses five matches loses the whole duel, so make sure to be on the other side of that trade!

As for the controls, they are simple:

Good luck we wish both of you, power and determination, and definitely invite you to stick around for more of our daily content, you can't really go wrong with it, it's always guaranteed to be a blast!