Dragon Fist 2 Battle for the Blade 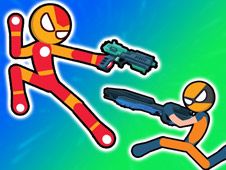 What is Stick Duel: Battle Hero?

Stick Duel: Battle Hero is going to be one of the top 2-player fighting and shooting games on our website, where, as the title clearly suggests, you are going to do battle with stickmen heroes, and despite both of you having the same title, you are still aiming to defeat the other one, something we're absolutely sure you will love very much!

Which Battle Hero will win the Stick Duel?

If you choose to play 1P, you need to defeat the enemies provided and controlled by the computer, with the goal being the same, depleting their health bar before they can do the very same to you first. The same rings true for playing in two players, in which case here is how you control your stickman heroes:

The two players then get thrown into an arena made out of platforms, with weapons being dropped on them, and then they start battling it out. Which one of you will win? We're wishing the very best to you both, and we hope that you continue playing games in this format, as playing together is the most fun possible!