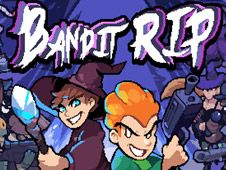 What is Super Bandit RIP?

Super Bandit RIP is a brand new multiplayer fighting game online with some IO elements to it which brings along characters from various other indie video games, and since it's not that often that they get to crossover with one another in such fashion, you should definitely give this game a go with no hesitancy!

Super Bandit RIP: the multiplayer fighting game you were waiting for!

For starters, know that the fights can take place in various ways, such as:

Use WASD for moving with your character, space to dash, and the J, K, and L keys for attacking. You have to pick a name, as well as a character design, with many of them needing to be unlocked, but here is the full list, nonetheless:

Now that you've got all the information needed to give this game your best, we invite you to do precisely that, and see just how much fun you can always have here, as we never disappoint with our newest content, or the old ones, for that matter!