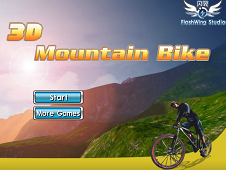 What is 3D Mountain Bike?

3D Mountain bike is definitely the game to play if you are an adventurer and a real addict when it comes to feeling some real strong thrills and vibes. Let's get to the work right now, before there will be too late and prove that you are the greatest rider ever, trying to ride that bicycle on those tough and damaged roads, with such a great speed. There won't increase automatically and in a couple of seconds the speed of your bike, as in the rest of the situation while you were driving a motocross or a car, but you have to be patient. Collect different stars, all of them so necessary for the final score, which is the score you will keep until the next mission so let's make it happen now. Use the arrow keys to climb the hills or get down, dodging the pits and different bigger stones, which may stop you from reaching further, as you've proposed. Go for it right now and do not forget that it is so important for you to collect the stars and avoid falling down because of the stone rocks!