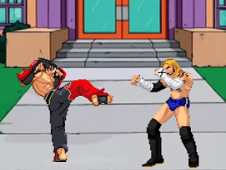 What is Pro Fighting Combat ?

Pro Fighting Combat is such a great, cool and so incredible fighting game, which offers to you the chance to use the arrow keys and A, S, D, W keys in order to move your character, it doesn't matter which one you are so make sure that you will make your opponent give up and this way you will win. As you've maybe already anticipated from the title of the game, there is a fighting mission involved so all you have to do is to use your insight and ability when it comes to some real fights, in order to kill and destroy your opponents, in the shortest time possible. The very first task of this game is to select the player you wanna fight with and your friend, should do the same thing. Once both of you have selected the fighters, professional wrestlers or different fighters from different categories, you can let the action begin so focus on fighting and destroying your opponent! Use the specific keys for hitting and defending and also the movement is such an important aspect for you too! Be the best fighter in this special combat and prove that you are the best when it comes to fighting!