The Last Airbender: The Burning Earth 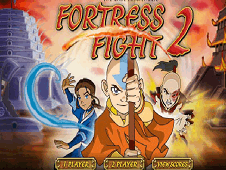 What is Avatar Fortress Fight 2?

Avatar Fortress Fight 2 is one of the more interesting games on the list of Avatar Games you can play for free online. In Avatar Fortress 2, you’re not playing as the elemental benders but as the entire nation in a fortress. Are you ready to command your fortress to victory?

You can play up to two players against each other or you can play as one fortress against an enemy AI. You can choose a nation’s fortress:

Each nation has its own bending power to use. For example, the Water Nation can use:

Each ability serves its own purpose. For example, the Healing Pool for the Water Nation gradually heals the fortress over a number of turns. Each fortress also has its own weapons. We will use the Water Nation’s weapons as an example:

●    Boulder: The basic weapon of the Water Nation. It deals moderate damage.
●    Amplifying Orbs: A magical ball of water that doubles the effects of any powerup it hits. Deals moderate damage.
●    Iceberg Spikes: Launches three separate ice spikes side-by-side. Each deal small damage.
●    Tidal Ball: Deals huge damage. Deals a small amount of extra damage if there is a Storm Front over your opponent’s fortress.

Each nation has its own bending powers and abilities. Play as each nation to see what abilities you can use. The purpose of Avatar Fortress 2 is to keep your fortress healed while damaging the other nation’s fortress. That may sound easy, but there are some tips you should follow first.

●    Don’t spam your bending powers. You can only use so much of your bending power at a time, and you want to either time it to go on the offensive or use them defensively. The last thing you want to do is use your bending power without any strategy.
●    Use your weaker weapons to gauge your aiming. You don’t want to use one of your stronger weapons and completely miss the enemy base.
●    Don’t focus too much on hitting the coins in the air. They’re helpful, but if you’re in a clutch situation, you should focus on a direct hit on the enemy fortress rather than only clipping it to try to grab a coin.