Scooby Doo Over Board 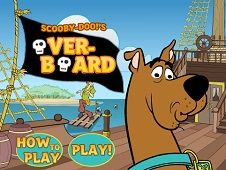 What is Scooby Doo Over Board?

You will have a great time again today on our website, because dear kids we are bringing for you the latest Scooby Doo game for kids named Over Board, in which dear kids you will see that Scooby Doo is trapped on a pirate's ship, and he needs to go to Shaggy in order to escape.

This is going to be a very funny and interesting adventure challenge, in which dear kids Scooby Doo is the main character, and he will need your help in order to gain a lot of points. You will see that there's going to be a lot of levels that you can unlock only if you escape from the pirate's ship with Shaggy.

At the beginning of the levels, you will see that Scooby Doo is on the board of the ship run by pirates, and you dear kids will have to start using the ARROW keys in order to control Scooby Doo. You will both have to start running to the water, and for that you will have to be very careful, because the pirates will try to do everything they can to stop you from escaping.

You will see that they will throw knifes, sharp hooks, swords or axes at Scooby in order to stop his escape, but you can be very careful and make sure that you avoid them, because this is going to be just the first of many dangerous things that you will have to avoid on the pirate's ship. There's going to be a lot of pirates swirming around that you have to avoid in order to not get caught and even a big cannon that will shoot continuously.

Shaggy is on the other side of the water, waiting for you on the beach of an island, but you dear kids will see that Scooby is afraid of swimming, so you have to jump from a raft to another in order to reach the island and the beach where Shaggy is waiting for you, and once you escape the next level will be unlocked. Have fun!