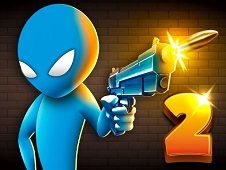 What is Drunken Duel 2?

In this new 2 player game, you are drunk and you must fight your opponent and you have to be careful to not fall since both of you are on a skyscraper. This game is the second in the "Drunken Duel" series and it can be played with the computer or another player like your friend. The point of the game is to shoot the opponent until they fall down onto the traffic. Your hand will spin constantly so shooting your opponent will be hard so you must time your shots correctly.

Compared to the first game, this new one added more guns and also a helicopter has been added that can be shot and if you manage to shoot it down, it will be sent flying down towards your opponent, knocking him off the building. There are many guns found in the game like shurikens, pistols, laser guns, and more. On each side of the building, there will be a bunch of blocks that can protect you from falling down if you hit it, though once you hit it they will fall down and you will be left with no protection. The helicopter can also send blocks that you can send towards your opponent by shooting it!