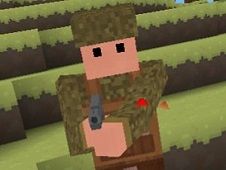 Voxiom.io is a combination of Minecraft and shooting games. In this game you have 2 game modes: Capture the Gems and Battle Royale. Both game modes require you to fight against an enemy, in a team or you alone, you must defeat the enemy.

In the game, you have several tools at your disposal. The first one is the shovel with which you can break blocks and mine underground tunnels. When mining you may find gems and other ores that you can break using your shovel. The ores are inside the stones you will find.

There are multiple weapons that you can choose from. The first one is the AK-47 which is a very powerful weapon that is hard to control. You also have an M4 that is the most balanced and versatile weapon in the game. Lastly, you have the Surge Assault Rifle and the P90 that shoot very fast and have high recoil. You can also choose from 2 pistols like the magnum pistol and the Strike pistol.

The game also features a crafting system, with enough ores you can make a block of that ore. From wood, you can craft planks. You can also craft a portable workstation or you may even recraft your shovel if you'd like to.

In the Capture the Gems mode you have 2 teams that need to fight against each other. You need to kill the enemies using your guns and the team that gets to 100 points first wins the match. Both territories feature a gem, if a team collects the enemy team's gem, they will get 30 points instantly.

In the Battle Royale mode, you must be the last one to survive. Every player is placed randomly in the sky and after parachuting down, you must loot the numerous towers and places for weapons and ammo. You must use the weapons and ammo you collect against any other players to try to be the last one. Every few minutes a toxic fog will close down further and further in that forces the players to kill each other. Staying in the toxic fog will slowly kill you.

Use WASD to move, mouse to aim and shoot.