Apple and Onion Floor is Lava

Apple and Onion Catch the Bottle

Apple and Onion Messin Around 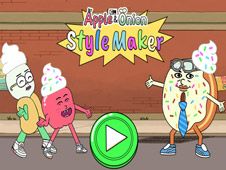 What is Apple and Onion Style Maker?

We don't believe that any character creator games online had been added before into our category of Apple and Onion Games from Cartoon Network, so imagine how happy we were when we discovered we can bring you such an experience for free right now, through the awesome game called Apple and Onion Style Maker.

Learn how to create your own Apple and Onion character in the Foodiverse:

Apple and Onion are fruit and vegetable, and this is because the two live in a world where food acts like humans, and now you can make your own food character, having the chance to customize characters that have the body of a pizza, a carton of milk, a soda can, a burger, or a donut, as well as the bodies of the two main character being available.

You will not only be able to change their features such as eye color, hairstyle and hair color, the shapes of their nose, ears, or mouth, but you can also give them outfits, picking out of the various clothes and accessories made just for food, and we're sure that the end result will be a stylish character.

It's that simple to play the game, so let your imagination run wild right now and here, and hopefully you stick around for all the other cool new games of the day we have in store for you!