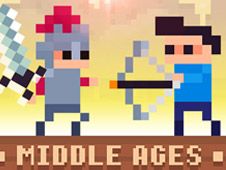 What is Castle Wars Middle Ages?

If the previous Castel Wars games online to have previously been added on our website were something that you enjoy, or if you simply love playing games in two players online, then you should definitely come to pick up the game called Castel Wars Middle Ages, which represents a continuation of the first one which takes you into the era of the middle ages, and we are highly positive that you are going to really love dueling in this period.

Learn how to play one of the best 2 player games with castles right now and here:

The main gist of the game is that the two players will each have a castle and they will both try to tear down the castle of the other one, with the last one standing becoming the winner. There is also a co-op mode where the two of you need to work together and defend one castle from a horde of pixelated zombies that want to tear it down.

Because you have been transported into the future, at least in relation to the other game, you will have cannons instead of catapults, and other weapons you can fire at the opposing castle include fire, or swords, with us also recommending you put some armor on your knights for protection. There's also a wings bonus you should try capturing when possible.

The controls that the Red and Blue players need to know about:

Good luck we want to wish both valiant knights fighting in this game, and we hope you play more of our two-player games online afterward and keep the fun going strong!