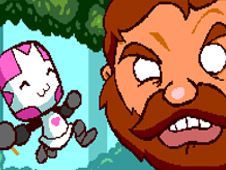 What is Castle Crashing the Beard?

Today on our website you are invited to play one of the best new action games online to have been added here lately, and we're talking about the 12th-anniversary edition and remake of a classic game you used to play way back in the day on Newgrounds, and this game is called Castle Crashing the Beard, a fighting game that can be played by yourself, or in the 2P mode with another person.

Become the knights that defeat the floating beard!

In a medieval fantasy setting, you will have a forest where there is a huge head of a man with a beard floating around, and your goal is to defeat it, so use the weapons and powers at your disposal to hit the bearded villain as many times as possible to deplete its health bar completely.

Of course, the bearded head does not just float around, but it will also attack in various ways, so make sure to avoid those attacks so your health bar does not become empty. If you make enough attacks, or you destroy enough stone relics around you, you will level up and become stronger.

You can also hit the bricks to get coins out of them just like in platform games. You will start off by having only two types of characters available, but you get to unlock more of them as you keep winning battles. Good luck, and we hope that you don't keep the fun to yourself, but share the game with as many friends as possible!