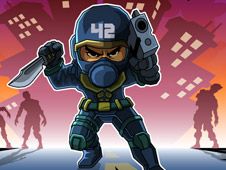 What is Zombie Killer?

It is with great joy that right now on our website we have the chance to share with you one of the best new action games with zombies online, a high-quality game that has cool graphics, fun missions to go through, and easy-to-understand gameplay, as well as it is playable on mobile devices, so for anything in the world you should not miss the opportunity of having fun with our Zombie Killer game!

Survive the zombie apocalypse and help people in need!

There are five types of missions you can go through, each of them presenting you with a different objective that you have to accomplish, and for all of them you start off in the easy level, and the more you win the missions and see them through, the difficulty gets bigger and you have to challenge yourself more.

You can differentiate between missions through their icons. The purple one with a target symbol is a zombie hunt where you have to go after zombies and clear off the sector of the city from them. The green one with a shield is called protect the street, and you have to help survivors from the zombies attacking them in plain daylight.

The orange ones are marked with coins and this is because you have to go around killing zombies while also collecting coins from the streets. The blue one with a clock on it is called stay alive, and you are playing against time, trying to survive against the hordes of zombies all up to the point that the clock strikes 0.

Probably the most difficult ones are the ones marked in a red skull, where you have to defeat zombie bosses, which are zombies that are faster and more powerful, so it will take you extra dedication and power to defeat them!

How to kill the zombies:

The arrow keys are used for moving, spacebar to attack, F to shoot, Q to switch weapons, G to throw items. From the main menu, you get to equip your character with new gear and weapons using the coins you earn as rewards for clearing the missions. Good luck, survive, and become the best zombie killer online in town!