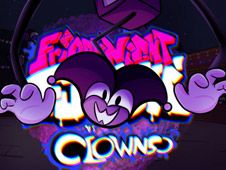 What is Friday Night Funkin vs. Clownso?

Get yourselves ready for a healthy new dose of fun with some new FNF mods online that are exciting from start to finish, just like we're happy to say is the case right now and here with the addition of the game called Friday Night Funkin vs Clownso, where you will meet and rap battle one of the most curious clowns to have ever been featured in this series, as he is not the first.

While Boyfriend and Girlfriend were out on a secret date at the local fair, far aways from the eyes of Daddy, Mummy, or other antagonists, they happened upon Clownso, an eccentric clown mascot, who looks like a purple jack-in-the-box, who challenges Boyfriend at a rap battle after him and GF did not want to buy his 'totally legal' figurines he was selling.

Fight with Clownso through three custom songs, using the arrow keys to press them at the correct times so that you hit all the notes correctly, but make sure not to make too many mistakes one after the other, because if that happens you lose the confrontation and have to start again from scratch.