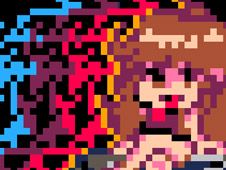 What is Pico Night Punkin'?

Pico Night Punkin' is a brand new FNF mod that focuses on Pico, the assassin, one of the original characters in this franchise, but this new version of the game is a low-resolution 8bit remake that looks like a game you used to play on older handheld consoles, so we believe that it has quite a lot of charm because of that, and there's no doubt in our minds you will love it also!

Learn how to play the awesome Pico Night Punkin' game:

Just like in previous games of the series, help BF defeat antagonists like Daddy Dearest, Pico, Mummy Dearest, Tankman, and many others in musical battles of rhythm, where you have to press the arrow keys at the correct times so that you hit all the notes of the songs properly, and if you do that enough and the bar turns green, you win.

Be very careful not to make too many mistakes one after another, because too many misses will cost you the game and let your opponent win, and then Girlfriend and Boyfriend will never be together again!