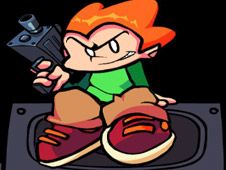 What is Friday Night Funkin with Pico?

Some of the simplest and most fun FNF mods you can find and play for free on our website are those where Boyfriend is replaced as the protagonist by other beloved characters in this series, which is the reason why right at this moment you are all invited to play the awesome new edition of Friday Night Funkin with Pico!

Become Pico and help him defeat all of FNF's antagonists!

Pico is the friendly assassin with orange hair who has a gun in one hand, but in these games, he would rather use his microphone for fighting, since this is a rhythm game, not a shooting one, and you now need to help him defeat Boyfriend, Daddy Dearest, Mummy Must Murder, the Spooky Kids, or Senpai. Can you do it?

To win you need to reach the end of the songs and turn the progress bars green. To achieve that you need to press arrow keys so that you hit the notes at the right time, so press them when the same arrows match above Pico, not one moment later or sooner, since that is a miss, and multiple misses in a row means losing the game.

Good luck, have fun right now and here, and don't hesitate to tell your friends about our awesome new games as well, they will love it here!