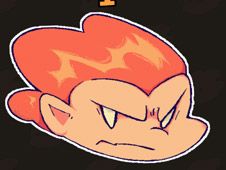 What is Pico Clicker?

The Friday Night Funkin Games has always done what it does best, which takes the original format of the franchise and spin it in new ways with the many mods and their new characters that they bring into the fold, but right now you are about to play a whole new kind of game in that series, and that one is here, called Pico Clicker!

Click on Pico to reveal as much art of him as possible!

Pico is one of the original characters in the series, who is an assassin sent out to take care of Boyfriend, but because they used to be friends, Pico spares him and challenges him to a rap battle instead. Well, Pico has been one of the fan-favorite characters in the franchise, and today you get to play a different kind of game with him.

Fans from all over the world have made fan-art of the character, depicting him in new ways, and you will have to click on the head of Pico as many times as it is necessary to get to the next fan-art, and so on. It's a clicker game where the more you click, the more fun you are going to have, of course!

It is that simple, so now that you know what to do, let the clicking and the fun begin!