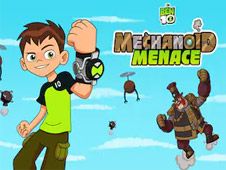 What is Mechanoid Menace?

The craze of rhythm games online has come even into the world of Cartoon Network's Ben 10, as right now on our website we are delighted to share with you all a different kind of rhythm game and skill game, one where your timing and skill, as well as focus, are going to be the keys to defeating Steam Smythe and his mechanoids, as he plans to use these evil robots for evil deeds because he is an evil man!

Become Four-Arms and smash the robots in style!

Robots are going to fly towards Four-Arms, who is sitting on top of a platform, and when they reach the green spots on the right and on the left of him, it means they are in range to be hit by his four arms. When they are in that spot, you tap the right and left arrow keys at the exact same moment to make the hits, simple as that.

The more robots you hit one after another, and the bigger your combo streak becomes, the more points you earn, and if you fill-up the green bar, you will get to use a special hit that is activated with the spacebar, which will take out any and all robots in one go, no matter where they come from.

Now that you know how to be of help to the alien superhero and save the day, start playing the game right now, and don't forget to share it with your friends who are also Ben 10 fans!

Use the arrows and spacebar to hit the robots Ben 10 is fighting against.