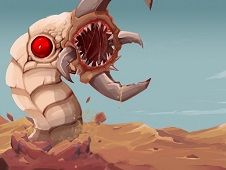 What is Deep Worm?

Deep Worm is an action game with huge worms, killers, which you will have to control as well as possible so that you can eat as many soldiers, civilians, military cars, fighter planes, or even military helicopters that fly over you.

The game takes place in the desert, which facilitates the mission of the killer worms because they can enter and exit the land very easily.

Pay attention to the obstacles you have at every step and try to avoid the attacks of soldiers who will try to destroy you, to shoot you using all the weapons provided.

After a while, you will notice that the army will bring even more forces against you, which makes this mission more and more difficult.

In order to destroy as many elements (people, soldiers, cars) that are positioned horizontally, we advise you to go with the killer worm as close as possible to the surface of the earth, and when you attack, do not go out much from the ground, because you will be discovered a lot and enemies can attack you.

Use the arrows to move.