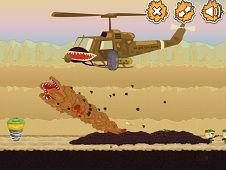 What is Sand Worm?

In order to eat, people will have to come out of the ground right into them or walk with their mouths open towards them. pay close attention to the soldiers who are in your way, because they are armed and will shoot you if they see you. Every bullet that is fired at you will drop from your life, which can even lead to the death of the killer worm. To evolve in the game, you will have to eat as many soldiers as possible and try to collect the bonus points in the game that is most of the time underground. In terms of bonus points, you will have to collect items that will increase your life or objects that will make the game run as fast as possible, and in this way, you will be able to have greater mobility that will help you increase your potential...

What is very important is that if you increase the speed of the game, the game will run faster for the worm and its enemies from the surface of the earth, so the bullets will hit you faster, which is why you will have to be faster. alert.
During the game, the military forces will increase their capacity, and in the game will appear cars with machine guns, helicopters or even tanks will patrol the desert to kill you.

use the arrows to move.