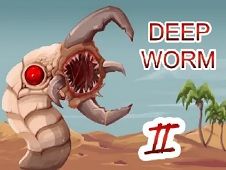 What is Deep Worm 2?

Deep Worm 2 is the second part of the famous giant worm game in which you will have to continue the mission started in the first level of the game Deep Worm I.

The giant worm that eats people

As you probably know from the first level of the game, you will have to control a giant worm, with which to try to eat as many people, soldiers, cars, planes, helicopters, or any other objects that get in your way. Also, when you notice bonus points that appear in the game, we guide you to go after them and capture them, because you will be properly rewarded, and in this way, you can help your worm to grow even more and become even more. strong.

In order to kill people, you will have to go underground until you notice that you are close enough to an enemy. The moment you are right under it, you will have to come to the surface and eat it. If you manage to touch him, you will be able to kill him. Pay close attention to the armed soldiers, because they will not hesitate to shoot with the weapons they have when you approach them.

At the top of the game, you will have the following information that you will need to keep in mind if you want to win these missions.

Deep Worm II is an HTML5 game, which is why you can access it directly from your phone, tablet, or even PC. If you access it from your mobile, you will notice that a joystick will appear on the left side of the screen, which you can use to coordinate the worm.

use the arrows to move.