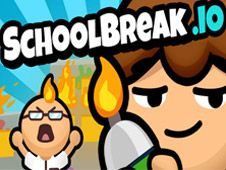 There are no better multiplayer games online at the moment than those we offer you into our beloved category of Io Games online, where right now we have returned with the awesome new game called SchoolBreak.io, a multiplayer game that brings forth the old-age competition between students and teachers, and no matter what side you pick, we're highly positive you will have lots and lots of fun with the game!

How to play and win the school break competition against worldwide players!

Players from all over the world are thrown into the same school grounds, which will be the battlegrounds between the two teams, the students, and the teachers, and know that winning matches will allow you to buy new skins for your characters, as well as other cool stuff! Pick a name as well, so that you can recognize yourself among the others.

If you belong to the team of students, during the break, you have to cause as much chaos through the school as possible, even attacking teachers, spraying paint around, ride bikes inside, make everything around you dirty, and more, trying to raise the chaos meter all the way to the top, to win!

If you've been assigned to the team of teachers, try catching the bad students that are doing bad things in the act, so that you can punish them and make them inactive for a limited time, because if they can't raise enough havoc in five minutes, you win.

We wish you good luck, no matter what team you are part of, with us encouraging you to try both roles to get the most out of this game!