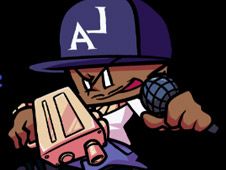 What is Friday Night Funkin vs DaBaby?

It was only a matter of time before FNF Games would crossover with more mainstream artists, especially those that have somehow managed to reach meme status, which can definitely be said of one of today's biggest and most popular rappers, DaBaby, who has become sort of a meme in itself, which is why he deserves his place in this series of rhythm games. Less GO!

In this game you can see DaBaby as an animated character, wearing his usual sportswear and his baseball hat that is synonymous with him at this point, and in one hand he holds a gun, and in another one the microphone he will use to duel Boyfriend. Of course, we've got his songs featured in this game, called Rockstar, Bop on Broadway, and More Money, More Problems.

To defeat him you have to get the rhyming scheme right without missing a beat and a verse, so when you see the arrows over Boyfriend's head match one another, press the same arrow on your keyboard, but know that if you screw up the timing too many times in a row, you miss out too many notes and lose the confrontation. Good luck to you!