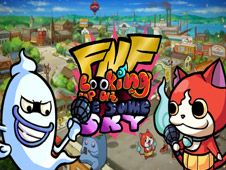 What is Friday Night Funkin' vs YO-KAI Watch?

Friday Night Funkin' vs YO-KAI Watch is yet another musical crossover with an anime series, one that is aimed mainly towards younger audiences, but a really popular one nonetheless, where you will now help BF go up against various ghosts from Japanese culture, where you will do it on some awesome songs:

Whether you are playing in the story mode or free play mode, the way towards winning remains the same, and it is by reaching the end of the songs, and that only happens if you play all your notes according to the charts.

To play those notes, watch when arrow symbols float and match above BF's head, and press the identical arrow keys at the same time. Be careful not to miss doing that multiple times in a row, since that will lead to you losing. Enjoy!