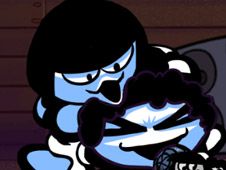 What is Friday Night Funkin vs Eerie?

Don't think we're done with bringing you new FNF Games for the day, since this category keeps on bringing you new and awesome games all the time, and this new version of the game is called Friday Night Funkin vs Eerie, a game we highly recommend, after having lots and lots of fun with it ourselves, so allow us to tell you more about it!

All you need to know about the FNF Eerie mod:

The game features the two Spooky Kids that you've played before against in the original FNF game, but, this time, they don't have their masks that make them so creepy, but they are still somewhat scary. Eerie is the main song that you are going to compete against them, which is fitting for their personality!

Help Boyfriend to defeat them by taking the song to the end and hitting all the notes of it. To do so, press the arrow keys when you see the arrows match on the screen, and make sure not to miss the notes because if you do that too many times in a row, you lose the game and have to start again! Good luck!