Code of the Samurai 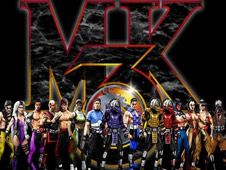 What is Mortal Kombat 3?

On our website, we've decided that it would be a really great idea to bring forward some old games that were available on older consoles because you probably can't play them on your current devices, but with the help of emulation, you can give them a shot on our website, where right now we introduce you to one of the best ever fighting games online in recent memory, the classic Mortal Kombat 3!

Fight, win, and make the most gruesome fatalities ever!

Every few hundred years, martial artists, magic users, and fighters from various worlds and universes, including Earth and its human representatives, get together at Mortal Kombat, a tournament between them where they fight to the death, in order to find out which world is the most powerful one.

Well, now you get to take part in the Mortal Kombat tournament yourself, with a brand new set of fighters, and you can either go through the tournament brackets or play single fights just for fun.

Pick between fighters such as Liu-Kang, Sub-Zero, Shao Kan, Sonya Blade, and many others, and then fight all of the other characters, beating them to a pulp until you deplete their health bar while making sure they don't do the same to you first because then you lose.

You use the spacebar to select, the enter key to start, and the arrow keys are the movement keys. Because this game is emulated, each key shown on the screen is a different key on your keyboard, and each of them is used for attacking in various ways.

Z is a, X is b, A is x, S is y, D is l, C is R. Now that you know how to control the fighters to battle, give your best, and try to perform fatalities and animalities for the best experience possible out of this game!