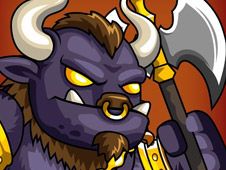 What is Battle of Orcs?

Battle of Orcs is not only our latest awesome addition to the io multiplayer games category we know you love so much, but it is also a high-quality game that has managed to expertly combined fighting, fantasy elements such as orcs and other creatures, and amazing fights in the context of war, so you've already got the best recipe for having lots and lots of fun!

Take part in the great Battle of the Orcs, and win!

In this game, you start off by entering your name, because you are playing against another player, each of you having a tower you try to protect while trying to destroy the tower of the other one, in order to win.

To do so you are going to deploy orcs, but other creatures as well, such as skeletons, dragons, and other ones, using the mouse to tap on the troops you want to send out in battle.

Always put out more troops, so that you can intercept your enemies. The more damage you make, and the better you perform, the more powerful types of troops you will be able to send out in battle.

You should definitely use the in-game money you earn in order to upgrade your stats, take on bigger and better players, defeat them, and slowly but surely climb to the top of the rankings! Good luck, and we hope you come out a winner, as always!