Night of the Funky Bot v2

Night of the Funky Bot 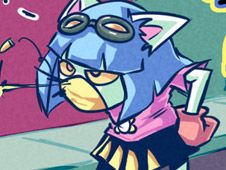 What is Night of the Funky Bot?

The Friday Night Funkin' Games category of our website keeps on bringing surprises, and this is definitely the case right now with the addition of the game called Night of the Funky Bot, which features a new character as well as awesome new songs for you to battle it out in, so there is fun to go around for as long as you want!

Meet the Funky Bot and defeat it in the rhythm battle!

Funky Bot is a female robot who wears red rain boots, a yellow skirt, a pink shirt, has a yellow mask, goggles on top of her head, and her hair is blue. She is an inhabitant of Jet City, where BF and GF were strolling about one day, so when he heard the sick-ass beats Funky Bot was playing, challenging it to a rap battle was only natural!

Learn how to win rhythm games like this one right now!

You have to win the rap battle by rapping all the way through the end of the song and turn the progress bar green, something you will use the arrow keys for because they are for hitting the notes of the song. When arrows match above BF's head, press the same arrows at the same time.

Missing too many of the song's notes in a row means losing the game, so don't let that happen at any cost, and if you're new, we recommend starting off with an easier level of difficulty!