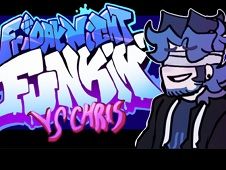 What is FNF vs Rapping Demons Chris?

Boyfriend seems to be quite bored, which is why he wants to summon a demon for a new rap battle in which to test your dancing skills like a pro. After a while he manages to summon the blue demon, named Chris Demons with whom you will have to start a new battle from which to emerge victorious so as to stay with you with Girlfriend.

Who is the Demon Chris?

Chris is a fictional demon that the creators of this Mod created to be an antagonist in this online game. Even if this character is a demon, his finicky appearance is as normal as he is, being just like a man. His physical appearance is athletic, with dark green hair, and he wears a headband over his eyes so that he cannot see, which is an advantage for Boyfriend because in this way he can beat him. In the lower part of the body, the demon is dressed in a pair of gray jeans, sneakers, and in the upper part of the body he wears a black sweatshirt. In the game you will know three different levels of this demon, and depending on how far you get in the game, you will notice that the demon will be more and more fierce, be careful!

The place where the rap battle takes place is a dark dungeon, full of candles and demonic signs, which we hope will not scare you, because they are awful.

The songs you will be able to dance to are the following:

-Oh hey...this is my first time being summoned.

-What a weird reason to be summoning demons...